Today's Podcast features Sam Gennawey, author of The Disneyland Story: The Unofficial Guide to the Evolution of Walt Disney's Dream to talk about Walt Disney's vision for DisneyLand, how it came to be, and how it shaped the future of the parks and the company. 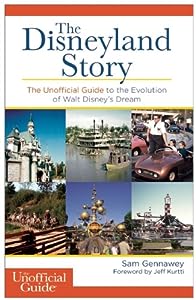 It was fun talking with Sam, since he has such a wealth of knowledge about the history of DisneyLand. I think you'll enjoy hearing it - and reading the book.

You can pre-order Sam's book here

Posted by Disney Dave at 8:02 PM No comments: Links to this post

Dave's Disney View Supports an organization called Autism Speaks. Check out the Autism Speaks: Tower of Terror 10-miler as a way for you to contribute AND get a Disney fix!
Posted by Disney Dave at 5:57 PM No comments: Links to this post

Dave's Disney View is available in many formats. Feel free to subscribe in whatever format you like!

Posted by Disney Dave at 5:52 PM No comments: Links to this post

Come along with me as I head out on a 4-park adventure. That's right, I was recently at the WDW resort, and visited all 4 parks in a day. The twist this time is that I only used busses and my feet to get between the parks. Take a listen as I tell stories and wander in and out of the parks.

The order of parks for me was Epcot, Animal Kingdom, Magic Kingdom, and the Studios. The rationale was to catch Soarin' early in the day - and to end at the Studios for Hyperspace Hoopla (it was Star Wars Weekend). And I wanted to catch lunch at the Flame Tree, so that worked out pretty well. Posted by Disney Dave at 4:18 PM No comments: Links to this post

I'm trying a different feature. Rather than news, instead I'm brining you the odd news related to Disney. I hope you enjoy!

Posted by Disney Dave at 9:00 PM No comments: Links to this post

In the third part of the look at the new Fantasyland at the Magic Kingdom, I head into Enchanted Tales with Belle. You do NOT want to miss the video of how the mirror opens! Then, I step out and walk over to the Tangled theme area - which amusingly is a bathroom. 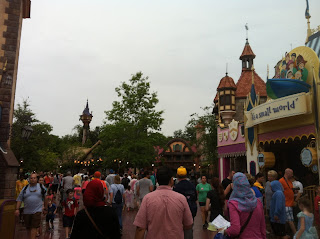 Posted by Disney Dave at 3:54 AM No comments: Links to this post